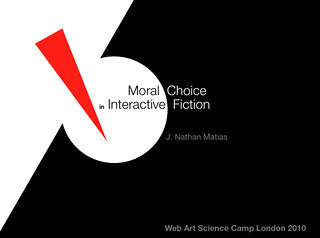 A dissertation proposing literary criticism of choice in Interactive Fiction. This project has also resulted in: 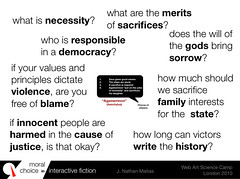 \r\n<p>Since the time of my dissertation, three major developments have had a significant impact in its area. </p>\r\n<ul><li> Mark Bernstein published a comprehensive review of electronic literature criticism, at ACM Hypertext 2010.</li>\r\n\r\n<li> Fail Better Games, a London creative company, is claiming to apply quantitative analysis of choice to their serial novel \x93Echo Bazaar.\x94 It has been a critical success.</li>\r\n<li> Marc Hauser has been suspended by Harvard for a year due to irregularities in his research on monkey cognition. This is a serious charge which is a significant setback to the science of mind. While the Moral Sense Test is not in question, I plan to collaborate with colleagues in late 2010 to duplicate Hauser\x92s experiment and test its validity (see above, about a microwork experimental platform).</li></ul>\r\n\r\n<p>Update: After joining the MIT Media Lab, I had to discontinue my work to create an online gameplay research framework. If you're interested in this topic, look at VolunteerScience.org, an initiative by David Lazer's research lab at Northeastern.</p>