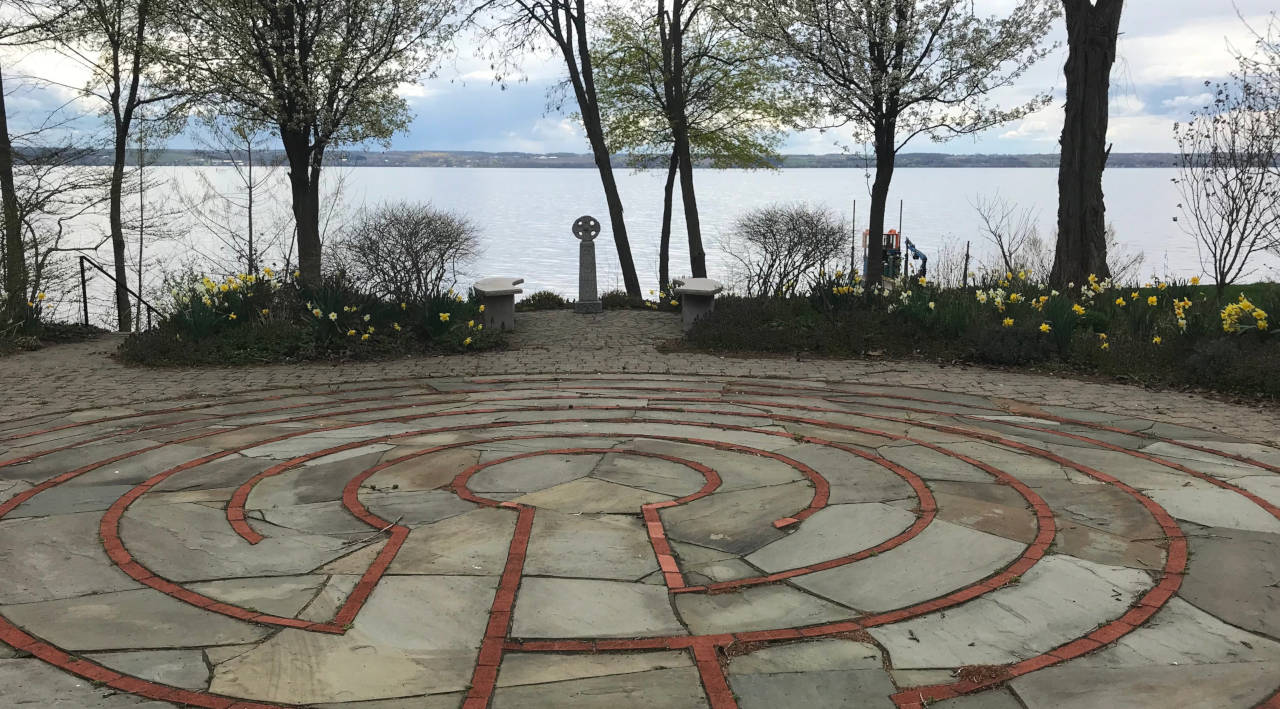 I’ll never forget the day I taught a college class from my car. As the camera framed my face among a jumble of back-seat bags and groceries, I tried not to feel defeated. Outside my window, snowflakes hardened and swept across the strip-mall parking lot. At least you are healthy and safe, I reminded myself, saying a prayer for the car’s heater and mobile hotspot. My students deserved to hear my story, and they needed to know the class would be okay too.

During the spring of 2021, my family and I spent three months precariously housed after fleeing pollution in Ithaca that gave us vertigo, migraines, and severe allergy/asthma symptoms. I still don’t have words for the struggle to find health, study our illnesses, stay safe as an immunocompromised person during COVID-19, and keep our jobs while constantly moving between short-term housing during a Central New York winter.

Are you someone with respiratory allergies, migraines, or vertigo related to smoke, mold, car exhaust, and the gasses produced by things that burn? Are you moving to the Ithaca area? When I moved here in 2019, I thought that small towns and rural areas would be even safer for my health than the cities where I lived for the past fifteen years. I was wrong.

With the right resources, it is possible to live healthy and flourishing lives in the area, even with allergy/asthma problems. Since moving here, I have learned that air quality health risks are an open secret. So many times when contacting a doctor, meteorologist, or housing expert, I would hear that our problems are common. I often wished that we had been informed when moving to the area rather than after we experienced severe disruptions to our lives.

The Ithaca region is one of the most charming and beautiful places I’ve lived. I’m excited to explore now that our health is better and COVID restrictions are lifting. I hope this post helps others moving to the area ask better questions than we did and make more informed decisions about health and air quality so you too can enjoy life in this special region.

Talk to your doctor

Allergies, asthma, and migraines vary by person and place, so please talk to your doctor first. I wish we had spoken to our doctor in Princeton before choosing where to live in Ithaca. By the time we found a new general practitioner and allergist in Ithaca, we had already chosen where to live.

Why did that matter? We learned the hard way that some parts of the region are unsafe to live for people with allergies and asthma. When we contacted our allergist this spring, they immediately understood the problem. “If medication doesn’t help, you will have to move” they said, explaining that our symptoms were pretty common in the area.

Talk to a local realtor

When we moved to the area, a local realtor generously gave us a tour of Ithaca. With so many hills, waterfalls, forest areas, and micro-climates, you can go a half mile and have a completely different experience. Although realtors in the area tend to specialize in home buying rather than rentals, they have deep local knowledge that can help you think about your decision.

I strongly encourage anyone with substantial allergies/asthma to choose a location that will reduce your risks of health problems in the area.

To successfully avoid air pollution, you need to know what you react to. Are you worried about pollen, ozone, and airborne agricultural allergens? Like me, do you also have a severe reaction to burning fuel (wood, gas, etc)?

These pollutants regularly concentrate in Ithaca during the fall, winter, and spring because the region experiences frequent temperature inversions. Differences in temperature cause the air between Ithaca’s hills to get trapped at low elevations, sometimes for over a week at a time. The temperature gets cold, people burn their wood stoves, and the pollutants roll down from the hills and from people’s homes in town to get more concentrated over time.

During these inversions, which sometimes lasted for multiple days, our only way to be safe was to drive up a hill. But which hill is safest? During the winter, the most common prevailing winds are from West to East. We often continued to experience pretty bad symptoms when driving East to Cayuga Heights and the parts of Lansing closer to Ithaca. We eventually realized that West Hill was usually our safest place to go.

How does pollution contribute to migraines? While migraines have many causes for different people, one possible cause is barometric pressure, especially when someone is congested from allergy symptoms. When sinuses get blocked, pressure differentials between the outside environment and the sinuses can cause debilitating migraines until the pressure changes. Since temperature inversions also increase air pressure, they can cause sinusitis and the conditions for crippling sinus migraines at the same time. Changes in barometric pressure can also cause migraines on their own. While the science of migraines and barometric pressure is still inconclusive, we found that the most reliable way to relieve our migraines was to move to a lower-pressure region, which we measured with a portable sensor.

Barometric pressure is hard to generalize, with so many conflicting research results. For example, a Japanese diary study with 28 migraine patients found that among people who seek medical help for migraines, headaches were associated with a change of 5 hectopascals. For comparison, here’s the chart of barometric pressure driving from West Hill into Ithaca over to East Hill: the pressure changed by nearly 40 hectopascals. 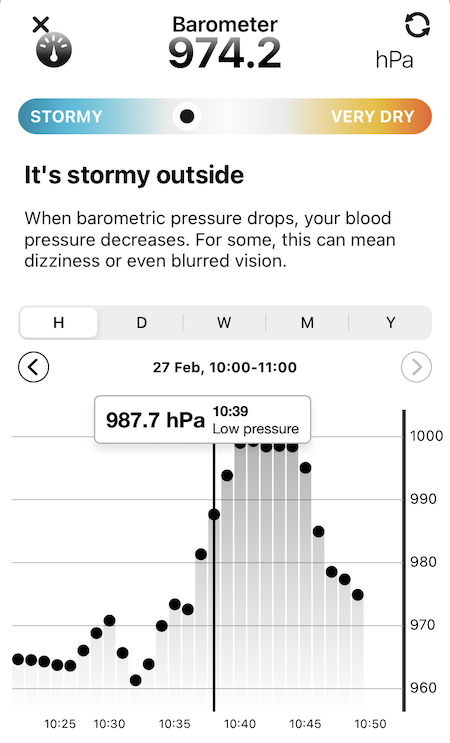 Changes in barometric pressure traveling from West Hill (near Mecklenberg) to East Hill on Saturday, Feb 27, as measured by an AtmoTube Pro. The pressure went up by nearly 40 hPA going downtown and reduced again upon climbing East Hill

How often do these inversions happen? With the help of a Cornell professor, I added an air pollution sensor at our apartment to a network that also included sensors on West and East Hill. We used the Air Quality Egg, which I mounted to an outside wall. The sensor shares data by connecting to our apartment WIFI. 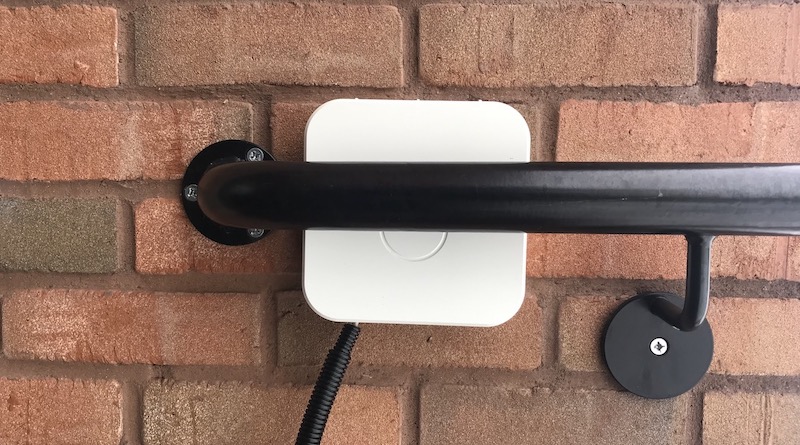 Later on, when deciding where to live, we used a portable sensor, the AtmoTube Pro, a battery-powered sensor that provides information on particulates, barometric pressure, and volatile organic compounds.

Important caveat: while <$1000 sensors like the Egg and AtmoTube are helpful for analyzing trends for the same (or similar) sensors over time, they are tricky to calibrate, they don’t measure all pollutants, and two sensors from different manufacturers can sometimes disagree about pollution levels. If you feel unwell and a sensor says the air is okay, you should listen to your body.

Be careful with charming older houses and apartments

Location isn’t the only thing to look for when choosing where to live. The median age of homes in Ithaca is 64, compared to 40 nationwide. As an area with waterfalls, hills, and lakes, moisture and flooding are common. Mold and mildew that stay dormant in colder, dryer periods can come to live in the spring, summer, and fall when the humidity rises.

If you have allergies, we encourage you to visit apartments in person before deciding where to live. Many online listings very deliberately exclude photos of damp, moldy basements, which can pump allergens into living areas through the (only sometimes filtered) central air system. Baseboard heating systems can also accumulate dust and mold that only spreads into the air once the weather gets cold. We’ve also seen plenty of apartments (sometimes in fancy high-rises) with mildewed carpets and window-frames. 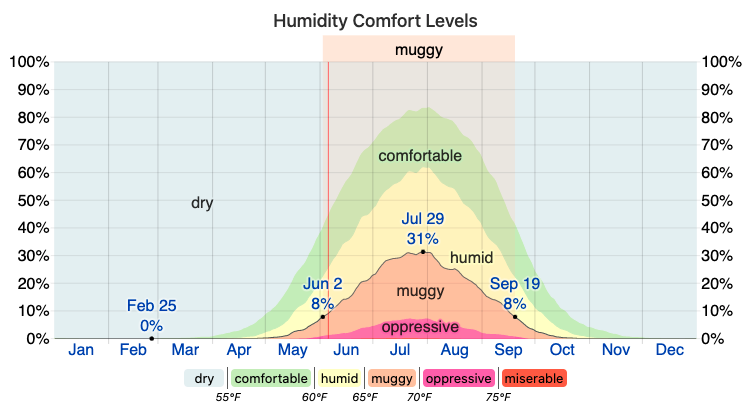 You’ll also notice that many homes in the area are heated by wood pellet or gas stoves. Since the gasses from combustion are hard to filter, people who react to combustion-based heat should take special care. Wood pellet stoves, even after cleaned, can still emit ash particles into the air, especially on humid days. We also learned that beautiful hardwood cabins can also off-gas volatile organic compounds that we’re allergic to—and which only special air purifiers (with things like Zeolite) can handle. Old, unsealed brick walls can also cultivate mildew and emit dust as the brick degrades.

After some bad experiences with interior allergies, we decided to bring our portable air sensor to check volatile organic compounds in prospective apartments. We now bring our purifier and sensors into the space and spend a couple of hours in the space before confirming that it works.

Be careful what you say to landlords

Even though asthma and allergies are covered under the Americans with Disabilities Act and the Fair Housing Act, landlords can get nervous if they think their property might make you unhealthy.

During our most recent apartment search, many wonderful people were supportive and put in extra effort to give us a chance to try out their place. But many other potential landlords stopped answering our emails once they heard we had respiratory conditions, refused to allow us to test the air quality, or outright told us they didn’t want to face the financial risks of renting to someone with a disability. We eventually learned to hold back information about our health needs until after meeting landlords.

Yesterday, I enjoyed a breakfast crepe sitting by the water at the Ithaca Farmers Market, my first visit since the pandemic started. It’s a magical place in a special region. Despite the challenges of health and housing my family have experienced since moving here, we’re still in love with the community and the landscape. If you, like us, have substantial allergy/asthma risks, I hope these tips will help you spend less time worrying about your health and more time enjoying what this region has to offer. 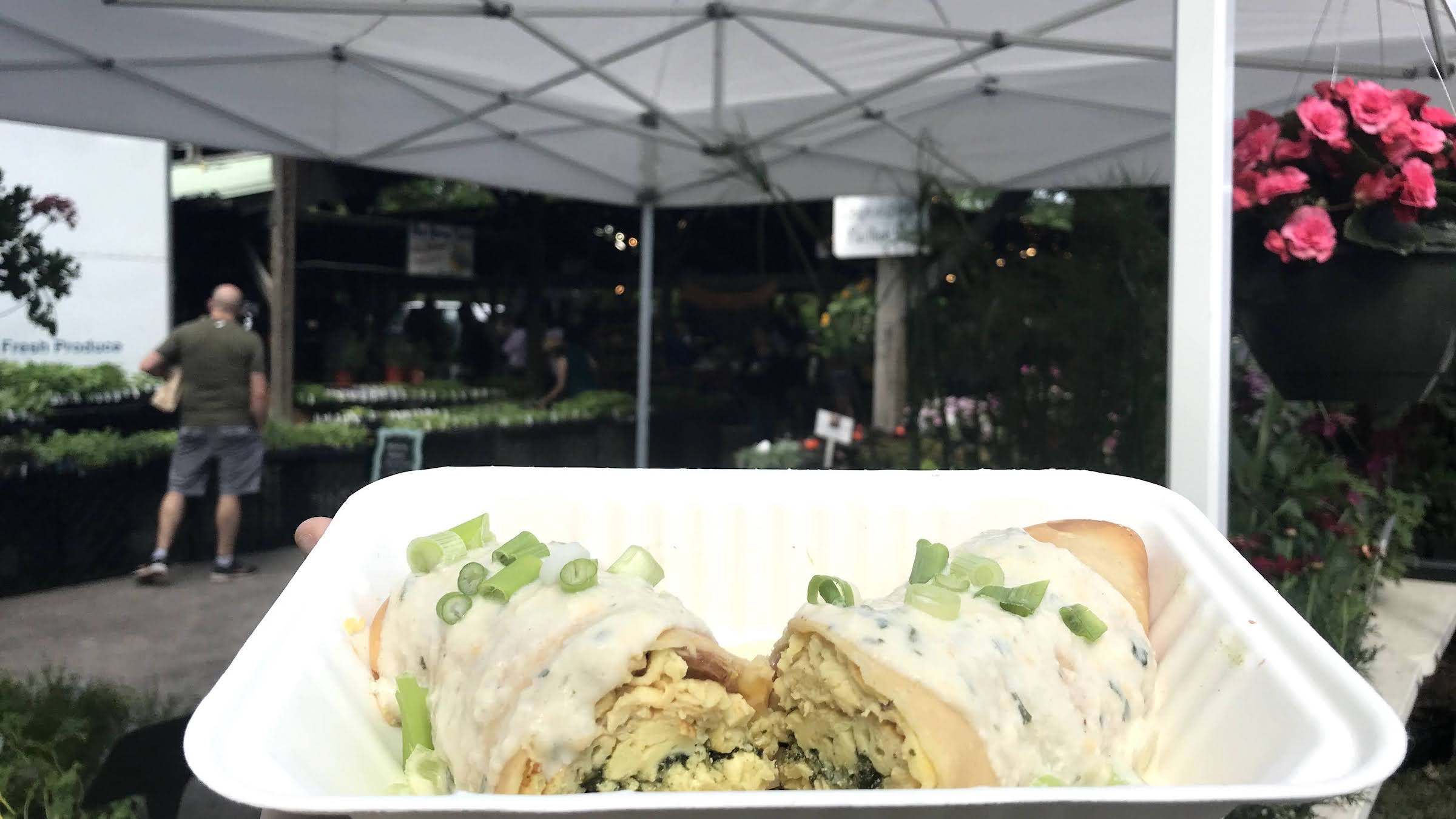 Please don’t take this post as medical advice without talking to your doctor. Allergy/asthma vary widely between people, and a strategy that works for us might not be good for you.

I am deeply grateful to Toby Ault for loaning me an air quality Egg and granting me access to the data from the wider sensor network. I am not a meteorologist, this analysis is my own, and any errors are mine alone. I’m sure Toby and others could do a much more nuanced analysis, I hope the data from our apartment will help that to happen!

I’ll update this post as I hear about any factual errors or further resources. This post was last updated June 6, 2021.